“With our music we Cubans have exported more dreams and pleasures than with our tobacco, more sweetness and energy than with all our sugar. Afro-Cuban music is fire, savour and smoke; it is syrup, charm and relief. It is like sonorous rum, which brings people together and makes them treat each other as equals. It brings the senses to dynamic life.” Fernando Ortiz

Omara was born in the barrio of Cayo Hueso, in Havana, known for its musicality. There was some scandal in the family. Her mother Esperanza Peláez came from a wealthy family of Spanish ancestry who assumed she would marry a rich, white man with a high social position. In fact, she ran away with a tall, handsome, black baseball player called Bartolo Portuondo. For years they could not walk down the street in public, but the marriage endured. Bartolo was a friend of the national poet Nicolás Guillén and a lover of music and the house, lacking a gramophone, was filled with singing. 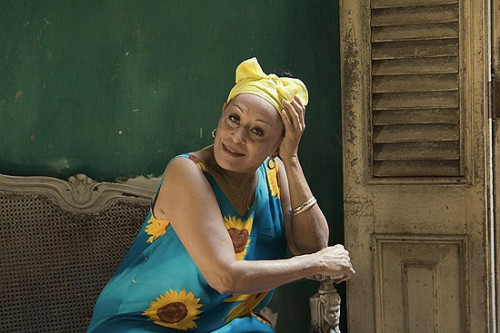 As a shy 15 year old, she broke into the lush, sequined world of cabaret, following in the chorus line shoes of sister Haydee, and became a dancer at the Tropicana, the glamorous club that continues still in Havava, a frozen relic of the decadent pre-Revolutionary days.  But singing was her forté, and she would spend weekends singing American jazz with the blind pianist Frank Emilio in his band Loquibambia Swing. The band was a mélange of pan-American sounds  and they created a new sound called “fillin” –feeling – and Omara was dubbed “La novia de fillin”,“the girlfriend of feeling.

She sang in the in the all girl Orquesta Anacaona in 1952, before with Haydee, with another female group Cuarteto D’Aida, a 1950s Cuban Spice Girls, directed and named after pianist Aida Diestro. Things began to really move for Omara and the group were signed to RCA Victor, toured the U.S. and backed up some of the biggest stars of the moment like Benny Moré  (“the Barbarian of Rhythm”), Edith Piaf, Bola de Nieve and Nat King Cole at the Tropicana. This was at the peak of the glamour, some say kitsch, of the famous nightclub.

As a soloist Omara accompanied some of the great innovators like Arsenio Rodriguez and Isolina Carillo.  Her first solo album was not, as with other Buena Vista Social Club members, after the release of that ground breaking album but was way back in 1959, entitled Black Magic.

After the Revolution of the same year, Omara carried on touring the States until things reached a crisis point with the Missile Crisis and Cuban-American relations were broken off. Omara and the Cuarteto D’Aida were in Miami when her sister, along with many other Cuban performers, decided to stay. Omara returned to Cuba and in a way filled a gap left by the departure of so many musicians from Cuba and her career flourished – at first with a reformed Cuarteto D’Aida and then, from 1967 onwards as a solo artist. For a while she appeared in vocal events in the socialist world and sang revolutionary songs and songs about Che Guevara and, later, Salvador Allende.

The U.S. was off limits, but she toured with Orquesta Aragon in Europe and in Africa, where they still have a huge following.  “Omara is a legend in Cuba, and it’s safe to say there’s no one of my age who didn’t grow up under her influence,” Cuban-born ballet dancer Carlos Acosta says “When I was a kid I’d see her all the time on television, singing the kinds of songs my parents liked.”  Omara was a versatile performer, but her speciality was a heart-rending romantic bolero – she was often compared to the great exponents of melancholy jazz like Billie Holiday or Edith Piaf.  She married and divorced and her son became her manager. Omara, a documentary film about her career won a prize at Cannes in 1986.

In 1997, just when she had hit normal retirement age and might be expecting to slow down, the Buena Vista Social Club project boosted her profile throughout the world.  Ry Cooder had heard her in the mid-90s and she happened to be recording in Egrem when an aborted Afro-Cuban project opened up some studio time . She said she was due to tour Vietnam but immediately recognised the importance of reviving the old school music and became the only female member of the gang. (Another might have been Celina Gonzalez, perhaps the only other female Cuban singer with enough stature  but she rolled the santeria cowrie shells and divined the deities were against her participation).

The album ricocheted round the world and novelist Salman Rushdie called 1998 “that Buena Vista summer” . Wim Wenders’ stylish film added rocket fuel to sales of the album.  Omara as well as “Silencio” and had another gorgeous duet drenched in nostalgia “Veinte Anos”, sung with Compay Segundo, a song Omara had recorded before and had originally learned from her parents.

Her solo album of 2000 picked up a Grammy and was followed by the Brazilian tinged Flor De Amor in 2004 which featured a song with family resonance called “Tabu” about inter-racial love. Other recordings and tours followed – a 60th anniversary album Gracias and stellar collaborations with Cuban jazz pianist Chucho Valdés. She was the first Cuban woman to be an International Ambassador for the Red Cross. In recent years, she’s sung everywhere from he Royal Opera House in London to the Latin Passion festival in Hong Kong.

Omara is a diva in the best sense, an ambassador of Cuba to the world. Now in her mid-eighties, there is a sense in which the curtains of an era are slowly, elegantly coming down. But she will forever, as the old showbusiness adage has it “Always leave them wanting more.”

Diego El Cigala is, quite simply, the most exciting and innovative flamenco singer in the world today. Passionate, profound, and immensely proud of his Spanish gypsy heritage, El Cigala has been called “the Sinatra of flamenco.” His earthy and exultant and richly emotive voice marks him as one of the great singers of the last century. He is also one of those rare crossover artists who has stayed true to his musical heritage yet achieved name recognition with mainstream audiences around the world. 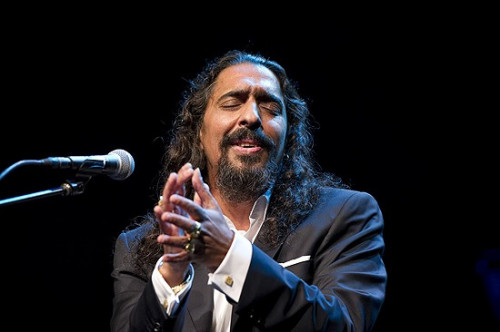 Born into a family of flamenco musicians, El Cigala began his solo career in 1997. A mere four years later he was at the Latin Grammys, his Corren Tiempos de Alegría nominated for Best Flamenco CD. That was just the beginning of much bigger things to come, as a small initial collaboration on that CD between El Cigala and legendary Cuban pianist Bebo Valdés led in 2003 to a duo CD, Lágrimas Negras (Black Tears), that became one of the most astonishing breakthroughs in the realm of world music. Aside from winning El Cigala his first Latin Grammy (he now has three), Lágrimas became a huge global hit thanks to a combination of killer live shows, rave reviews, and ecstatic word of mouth. This groundbreaking disc, with its fusion of gypsy fire and complex Cuban rhythms, sold more than a million copies worldwide.

This was unprecedented success for a flamenco singer – and it was to prove just the beginning. El Cigala won his second Latin Grammy in 2006 for Picasso en mis ojos (Picasso in my eyes), which also became a bestseller. Then in 2010 El Cigala travelled to Argentina, land of the tango, to immerse himself in that country’s powerful musical traditions. After merging his own band with two of Argentina’s tango masters – bandoneonist Néstor Marconi and guitarist Juanjo Dominguez – the results were, once again, musical magic. Cigala & Tango won a Latin Grammy for Best Tango, and went on to generate fantastic sales, great reviews, and a sold-out tour that played to more than 160,000 awed fans.

El Cigala’s newest recording, 2013’s Romance de la luna Tucuman, offers a fresh take on the Argentinean tango tradition. Notable for the contributions of Mexico’s famed electric guitarist Diego Garcia, known as “The Twanguero” for his embrace of cowboy, Hawaiian, and surf music, Tucuman went on to triumph at the 2013 Latin Grammys, winning El Cigala a third Grammy, his second for Best Tango.

2014 and 2015 have been amazing touring years where Romance de la luna Tucumana played all across the world, Diego stepped into the best stages like Carnegie Hall in New York City and Disney Hall in Los Angeles, both sold out concerts. 78 shows where his mix of Argentinian and Spanish sounds seduced the audience.